What’s Next in the DtC Shipping of Alcohol?

When Oklahoma began permitting direct-to-consumer (DtC) shipping of wine last October, it became the 45th state to do so. But getting to 45 states that permit DtC shipping of wine did not happen overnight. Indeed, it was a long and intensive effort of campaigning and lobbying state-by-state to get to where we are today.

With only a few holdouts left, it seems like there might be an end to that journey in sight. And so we are inevitably asked, what next? When will the DtC shipping map be entirely filled in? In this post, we will look at the remaining states and assess their chances of changing anytime soon, along with examining some of the other issues affecting the DtC shipping of alcohol, including the question of whether retailers will ever enjoy similar rights as wineries, and what about beer and spirits. 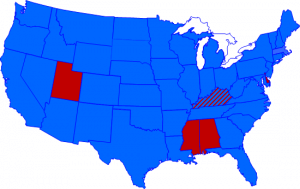 What Is Direct to Consumer Shipping of Wine, and How Did We Get to Where We Are?

As ever, it helps to begin with definitions. When we talk about DtC shipping of wine, we are referring to a specific type of sale where a consumer reaches out to a wine seller (for our purposes, this is most often the actual producer of the wine, but increasingly it can include licensed wine retailers) to make a purchase of wine, and then has that seller ship the wine through a common carrier (like FedEx or UPS) directly to the consumer. This sale can be done in person (“on-site”) or remotely (“off-site”), but the critical condition is that the consumer does not take possession of the product until it is brought to them by the carrier.

When it comes to the sale of alcohol, states have tremendous power to regulate this market, including by outright prohibiting it, even if it represents a business practice that is increasingly ubiquitous in other markets.

Currently 45 states permit DtC shipping of wine (see map). Most of these states only moved to enable DtC shipping after the 2005 Supreme Court case Granholm v. Heald, with the hardscrabble efforts by organizations like Wine Institute and Free the Grapes! to lobby state legislators to create laws for the DtC shipping of wine. Because of those efforts, nearly every American can receive shipments of wine from their favorite domestic wineries. But this is not (yet) a universal right.

Where is DtC Shipping of Wine Not Allowed (or Severely Restricted)?

The DtC shipping map is almost entirely open, but there are still a few holdouts. This is not for a lack of trying, but more because these states—for a variety of reasons—have determined that DtC shipping of wine is not suited for their populations. In addition, there are the few states that are ostensibly open to DtC shipping of wine, but still limit it such that we can’t really talk about them like we do with the other open states.

Efforts are ongoing in these states to introduce or further enable DtC shipping of wine. The best way to improve a state’s DtC shipping laws is through concerted grassroots efforts by residents of these states contacting their state legislators directly. It is one thing for a winery in California to ask for DtC permission in Alabama, but much different for an Alabama resident to petition their representatives for the right to receive wine from California. Free the Grapes! provides wine lovers in these states with pre-drafted letters they can send to their legislators stating their desire to have greater right to buy the wine they want how they want. If you have customers in any of these states who want the right to receive wine shipped from you, direct them to Free the Grapes! so they can join their voices to the cause.

The DtC Market and Compliance

In addition to opening (or better enabling) these states to DtC shipping of wine, there are a number of other ongoing efforts aimed at improving how this market operates and manages its compliance needs.

A big concern for the states right now is ensuring that participants in the DtC wine shipping market are properly compliant with the state’s rules. One way that states are moving to improve this is by adding additional reporting requirements on wineries and common carriers. By receiving more order data—in particular shipment tracking numbers—states are looking to  more thoroughly police the market, and ensure that orders are indeed coming from properly licensed entities. In addition to these reports, states are asking for more information about third-party services wineries use to enable their DtC shipments, such as fulfillment houses. Again, the purpose behind these rules (which several states are looking to add) is to allow them to recognize which licensees are behind each order of wine.

Similarly, proponents of DtC wine shipping are actively working to eliminate many of the restrictions on DtC shipping that have little to do with a state’s interest in promoting public health and safety. These include laws in Ohio and New Jersey that prevent wineries producing more than 250,000 gallons annually from receiving a DtC license. Same for laws in Indiana and Louisiana that restrict a winery’s ability to engage in both the DtC and three tier (i.e., wholesale) markets. There seems to be little justification for these type of rules, besides protectionism for local businesses (which after the ruling in Tennessee Wines may be harder for a state to justify, though these battles are happening in the legislatures not courts), and so it is hoped they will soon be removed from the DtC shipping statutes.

Following the Tennessee Wines ruling, a great deal of talk has gone on regarding the right of retailers to enter the DtC wine shipping market. Currently, only about a dozen states will permit out-of-state retailers to ship wine DtC. However, lawsuits in Michigan and Illinois, which were stayed pending the Supreme Court’s ruling, have reopened with the retailer litigants now having much firmer ground from which to argue. In addition, retailers and their advocates have initiated lawsuits in many more states in the last few weeks in an attempt to force them open to retailer DtC shipping as soon as possible. How successful these lawsuits will be remains to be seen (in many of these states the claim of discrimination against out-of-state interests, which underpinned the Tennesse Wines ruling, is not readily apparent). But it is clear that there is a lot of interest and support to expand the right to ship wine DtC to even more parties.

In the discussion of DtC shipping of wine, beer and spirits are often overlooked. Indeed, the right of brewers and distillers (and retailers) to ship these products is vastly more constrained than for wine. This is the case for a number of reasons—wine is more expensive than beer, so the cost of shipping a case or two at a time is more justifiable; and wine is seen as less socially problematic than spirits, so regulators are willing to be more relaxed with it. Nevertheless, the success of the DtC wine shipping market (now a $3 billion market!) has lead to envy from other product lines. The Kentucky bourbon industry has been very active in recent years trying to expand DtC shipping of spirits—though their work has largely been focussed locally on the Bluegrass State, and not yet in opening other states to receiving Kentucky bourbon. As more effort is put into expanding and better enabling the DtC wine shipping market, it should be expected that other beverage alcohol producers and sellers will look to join the market.

In many ways 2019 seems like it may prove to be a crucial moment for the DtC wine shipping market. This was the first year that the $3 billion mark was hit, and the Tennessee Wines ruling has brought the debate about interstate shipping and regulation of alcohol back to national attention. As we’ve described here, there are still a number of ways that the DtC wine shipping market can be improved, both by opening up the remaining states and removing some of the less-justifiable restrictions. At the same time the efforts by states to better their tracking of the market—which should aim to enable greater compliance with clear and attainable requirements and not snuffing out a still developing market—is an important part of this evolution. With other entities, like retailers, distillers, brewers, and importers looking to expand their DtC shipping of alcohol, there are a lot of lessons to be taken from past decades on what works and what good compliance looks like. We at ShipCompliant aim to enable that market as it continues to grow.